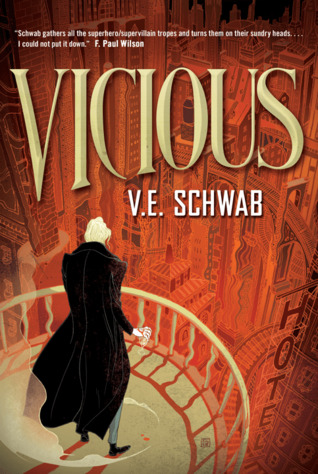 Victor and Eli started out as college roommates—brilliant, arrogant, lonely boys who recognized the same sharpness and ambition in each other. In their senior year, a shared research interest in adrenaline, near-death experiences, and seemingly supernatural events reveals an intriguing possibility: that under the right conditions, someone could develop extraordinary abilities. But when their thesis moves from the academic to the experimental, things go horribly wrong.

Ten years later, Victor breaks out of prison, determined to catch up to his old friend (now foe), aided by a young girl whose reserved nature obscures a stunning ability. Meanwhile, Eli is on a mission to eradicate every other super-powered person that he can find—aside from his sidekick, an enigmatic woman with an unbreakable will. Armed with terrible power on both sides, driven by the memory of betrayal and loss, the archnemeses have set a course for revenge—but who will be left alive at the end?

What a fabulous read – 4/4 Yummy Dessert Popsicles! I am new to the V.E. Schwab bandwagon, but man did I ever enjoy Vicious. I believe I even enjoyed it more so than Darker Shade of Magic.

The paper called Eli a hero.

The word made Victor laugh. Not just because it was absurd, but because it posed a question. If Eli really was a hero, and Victor meant to stop him, did that make him a villain?

He took a long sip of his drink, tipped his head back against the couch, and decided he could live with that.

Overall, Vicious is a quick read and perfect book for that commute or getting out of that reading slump. I really hope you give it a try, especially with Vengeful coming out this year!

Victor’s smile widened as he buried his knife between Eli’s ribs.

“I know,” he said loudly. He had to speak up over the screams. “But you’ll have to indulge me. I’ve waited so long to try.”

Let me know in the comments on your thoughts on anti-heroes – are you for them of against them? Have you read Vicious? What did you think?